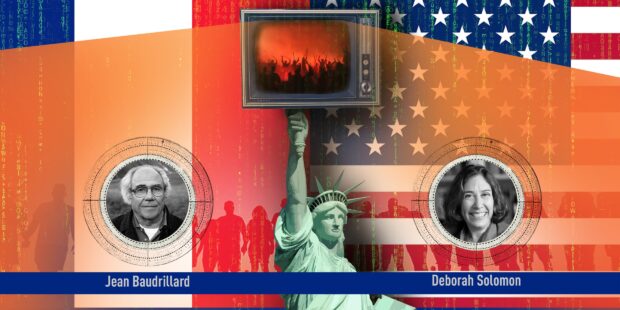 Deborah Solomon: As one of France’s most celebrated philosophers, can you give us any insight into the civil discontent that is pitting a generation of young people against the rest of the country?

Jean Baudrillard: It will get worse and worse and worse. For a long time, it was a relatively friendly coexistence or cohabitation, but the French haven’t done much to integrate the Muslims, and there is a split now. Our organic sense of identity as a country has been split.

DS: Perhaps that was inevitable. Many of us here were surprised last year when the French government banned hijabs, head scarves, and other religious emblems from public schools.

JB: Yes, in America there is more of a history of immigration. America is constituted by ethnic communities, and though they may compete with one another, America is still America. Even if there were no Americans living in the United States, there would still be America. France is just a country; America is a concept.

DS: Are you saying that America represents the ideal of democracy?

JB: No, the simulation of power.

DS: At 76, you are still pushing your famous theory about ‘simulation’ and the ‘simulacrum’, which maintains that media images have become more convincing and real than reality.

JB: All of our values are simulated. What is freedom? We have a choice between buying one car or buying another car? It’s a simulation of freedom.

DS: So you don’t think that the US invaded Iraq to spread freedom?

DS: When you say ‘we’, who are you talking about? In your new book, The Conspiracy of Art, you are pretty hard on this country.

JB: France is a by-product of American culture. We are all in this; we are globalised. When Jacques Chirac says ‘No!’ to Bush about the Iraq war, it’s a delusion. It’s to insist on the French as an exception, but there is no French exception.

DS: Hardly. France chose not to send soldiers to Iraq, which has real meaning for countless individual soldiers, for their families and for the state.

JB: Ah, yes. We are ‘against’ the war because it is not our war. But in Algeria, it was the same. America didn’t send soldiers when we fought the Algerian war. France and America are on the same side. There is only one side.

DS: Isn’t that kind of simplistic reasoning why people get so tired of French intellectuals?

DS: Do you think there are intellectuals in America?

JB: For us, there was Susan Sontag and Noam Chomsky. But that is French chauvinism. We count ourselves. We don’t pay attention to what comes from outside. We accept only what we invented.

DS: Were you a friend of Susan Sontag?

JB: We saw each other from time to time, but the last time it was terrible. She came to a conference in Toronto and blasted me for having denied that reality exists.

DS: Do you read the work of any American writers?

JB: Unfortunately, French literature starved itself. It didn’t need French theory in order to die. It died by itself.

DS: Some here feel that the study of the humanities at our universities has been damaged by the incursion of deconstruction and other French theories.

JB: That was the gift of the French. They gave Americans a language they did not need. It was like the Statue of Liberty. Nobody needs French theory. 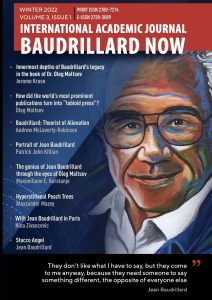