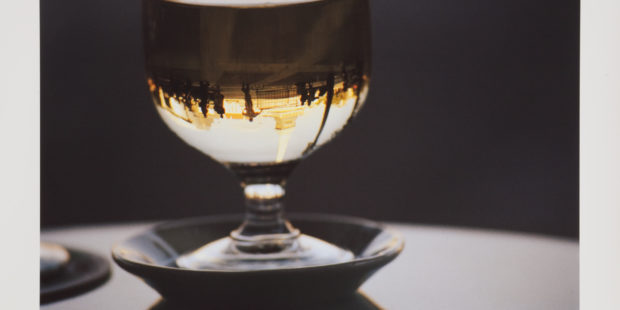 The extraordinary impact of Baudrillard’s theoretical work on the development of art in the entire world is well known. Little known is the fact that Baudrillard himself is an artist. Twelve years ago he started to take occasional photographs during his many travels. In the past six years this activity has become especially intensive. Baudrillard does not see his artistic activity as being directly connected with his philosophy. On the contrary, he takes pictures of what he does not want to comment on, and what he photographs escapes writing. But obviously the theories of Baudrillard are a background we cannot deny while we are looking at his pictures. In this respect, the title of this book and of the exposition of the Neue Galerie in Graz (1999) already gives a hint: “Within the horizon of the object” echoes the title of his dissertation of 1968, “Le systeme des objets”[1], which he wrote while he was the assistant of Henri Lefébvre, the author of a sociology of everyday life.”[2] Baudrillard was thus very early attracted by objects and has claimed the equivalence of subject and object in a radical theory. Reading the texts to his photographs and looking at the photographs in this book makes it obvious that he has made this theme the basis of his artistic work. This artistic work shares a common space of ideas with his theoretical texts. Yet Baudrillard’s analysis of the system of objects is not a phenomenological one, but a semiological one, looking at it as a system of signs. Baudrillard’s photographic practice is also situated in this field of a semiotic system. Therefore, a brief reference to Baudrillard’s theory of signs. In 1972, Baudrillard published “Pour une critique de l’économie politique du signe”, a reply to Marx’s “A Critique of Political Economy” (1859). In this work, as in his later writings, “Le miroir de la production” (1973) and “L’Echange symbolique et la mort” (1976) Baudrillard tried to show an extension of the law of commodity value at the level of the sign with a “political economy of the sign”. This structural revolution basically relies on the illustration of how the Marxian splitting of the commodity into use value and exchange value was repeated by the Saussurean splitting of the sign into signified and signifier. The exchange of linguistic signs in the circulation of meaning follows the exchange of commodities in the circulation of financial capital. The exchangeability of all commodities corresponds to the exchangeability of all signs. In this total and general interreference and exchangeability, combination and simulation, the signifiers turn into exchange values and the signified takes the role of the use value. The free floating signifiers correspond to the abstracted and complete exchangeability of commodities under capitalism. The signified and the signifier can form a chain of signs out of links which refer to each other and can lead to a semiotic catastrophe. Baudrillard’s Photographs are flights out of these catastrophic sign zones, that Baudrillard the theoretician has analyzed. There is no more real, since the signs of the real have replaced the real. Like the exchange value the signifiers can thus float freely. Thereby he created the ground for a semiotic aesthetics, which looks for its melancholic foundation between the “godlike absence of the referent of the image” and an “aesthetics of disappearance.”

The lingering and the seduction is followed by the disappearance. The appearances of the objects mirror simultaneously their disappearance. An aesthetics of appearance parries an aesthetics of disappearance. The exorcism of things, the trust in the world of things is followed by the collapse, the distrust of the image. The appearance of the signs rescues the appearance of the things from disappearing. In Baudrillard’s photography, the epiphany triumphs over phenomenology and phenomenology forms the frame for a melancholic Critique of epiphany. The laconic character of things is the reason for their beauty. Baudrillard photographs this beauty in a laconic way. In art, it is traditionally the subject that puts its stamp onto the world. It directs and constructs. It places everything on expression. The subject arranges the world of objects into a form in which the perception of the objectual world does not express the qualities of the objects, but the qualities of the subject. The photographic image is the expression of the subject, not of the object.

Baudrillard turns this historical condition of photography around. The quality of the objectual world to be an image is not defined on the level of the subject, but, as it was already said, on the level of the object that, so to speak, comes to itself through the image. The pure object is the primal scene of the image, and this primal scene, in reality, is without image, at least without a leitbild. This apparent antinomy of the pictorial quality of objects before the state of being a picture, an art before art, can be illustrated by the metaphor of a “langue sans parole” (F.Picabia). Here, as in many other cases, Baudrillard’s position is closer to the Critical Theory of the Frankfurt School as it is usually supposed. His aesthetics of the image correlates with Adorno’s aesthetics without leitbild, a paradox aesthetics, “parva aesthetica”.[3] Baudrillard interprets this aesthetics without leitbild as trans-art, as art without or after art. The longing for a trans-art corresponds to Baudrillard’s longing for a politics after politics, for a trans-politics. There is a peculiar form of ecstasy in his photographs, as every ecstasy is determined by its element of transgression or transcendence. This ecstatic enjoyment through the photographic image is precisely this moment beyond politics, beyond the social, beyond the media, beyond art, precisely this moment of enlightenment through transgression which is promised by the primal scene of the image, the perception before the image. Baudrillard resolves the paradox of an image without leitbild by referring to the fourth instance of the encounter of image, object, and subject, namely the photographic apparatus. For him, the possibility for the object to be an image and the power of the subject over the image are equally determined by the technical virtuality of the photographic apparatus, which has in theory already been laid out by Vileém Flusser.[4] The image is an acting out of technology, an exhaustion of the technological possibilities and thus the virtuality of the photographic apparatus. The automatic of the virtual produces the image. The person, the subject, is nothing more than an operator of the program, of the apparatus. With this definition of the image as the virtuality of the machine and as an elaboration of its technological possibilities the object succeeds in putting its stamp on the subject and its perception. The object mirrors itself in the subject.

In the mirror of photography, the objects come closer, like in the warnings that we can read on the rear mirrors of American cars: “Objects in this mirror are closer than they appear”. Objects in the mirror of photography are closer than they appear. The distance between subject and object is smaller and narrower than our illusion makes us believe. By insisting on the role of object and apparatus, Baudrillard escapes two notorious traps of photography: the art trap and the technology trap. The art trap consists in the expressivity of the subject at the cost of the object. The technology trap consists in the expressivity of the apparatus at the cost of the subject. In both cases, we deal with forms of hegemony: the conditions and qualities of the subject and of the apparatus dominate and distort the conditions and the qualities of the objects. Photography turns into a distorted mirror of the object. By escaping the art trap as well as the technology trap, Baudrillard becomes the photographer of the world of things par excellence.

Without the pathos of history, without the constructed objectivity or mise en scéne of art photography he produces a photography of things that, for the first time, is adequate for the things themselves. Through its reduced aesthetics, his photography of things does, for the first time, justice to the things. Do the photographic portraits form a horizon in whose mirror the objects appear distorted? It is at least significant for the perception of the philosopher that he should have chosen one sentence which can be read on everyday automobiles as a warning, as a leitmotif for the perception of images. Of what nature is the mirror of photography? Do the photographic portraits form a mirror in which the horizon of objects appears distorted? Is the human being a mirror and are the objects thus closer as they seem or do they just seem to be closer to us than they are? Does Baudrillard survey not only the horizon of the objects with his photographs, but also the distance between the human beings and the objects? Are Baudrillard’s photographs the beginning of the end of antropomorph photography and pictorial art?

Author: Peter Weibel
Director of the ZKM Center for Art and Media Karlsruhe.