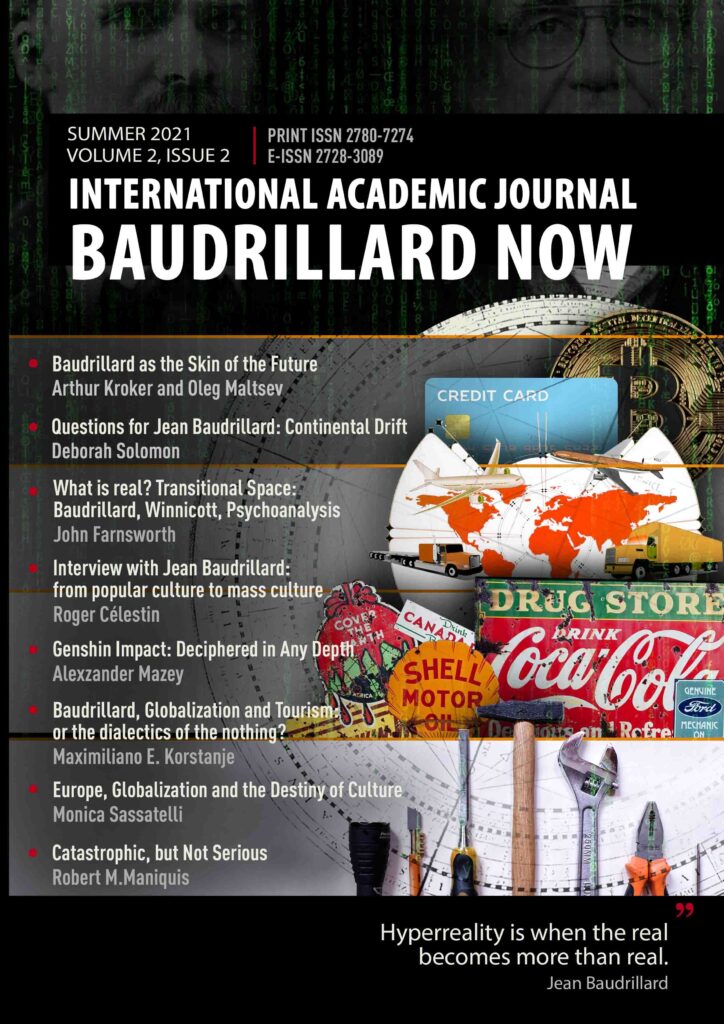 Jean Baudrillard was an immensely gracious, very warm and intellectually curious person. As a scholar, he was somebody who thinks about the world in social, cultural, political terms. He was acutely insightful, perceptive and deeply knowledgeable. Jean Baudrillard was a prophetic historian of the future. I always think that Baudrillard is a Nietzsche of our times in many ways.

This paper takes up a psychoanalytic critique of Baudrillard’s critical theory to discuss how his formulation of the real, the object and the hyperreal can be opened up in quite different ways. This is by drawing on the concept of potential space and transitional phenomena. The paper suggests that provides new and potentially complementary ways of understanding the real alongside Baudrillard’s writing.

I don’t really know how the term popular culture is used in the United States. I have the impression that it is much broader and that it is nourished by the mixture of languages, ethnic groups, and cultures, all of which doesn’t really exist in France. In fact, we don’t really speak about popular culture in France today any more. I don’t know if it exists, but in any event the concept of it has disappeared.

Yes, the complexity of life is eviscerated in video games. This is no better realised than in the clouded-fantasy world of ‘Teyvat’, which offers neither high fantasy nor intrusion, replacing the complexity with a cold mythology from which we provide the heat. It is unsurprising how Genshin Impact, the video game developed and published by the Chinese game developer and animation studio, miHoYo, has found recent controversy precisely in the way it provides ontological subsidence.

For some reason, which is very hard to precise here, Jean Baudrillard was an author who is not widely cited in tourism studies. This happens simply because he reads as a complex writer whose theses are mainly characterized by a critical approach to consumerism. A second reason rests in the fact that tourism studies keep a difficult relationship with Marxism and critical studies.

The true European identity was an idea, a dream even, a utopia. Europe existed perhaps more as a circulation of ideas in the Middle Ages than today. This idea today has become true through economic, political, structural means; in this sense it is already achieved, there are no problems, it works very well. It works very well on the market side, that is, the side of globalisation, of which Europe is just a micro-model.

You know they gave five thousand Minitels to people in Strasbourg; then someone hacked the system so well that lots of people began communicating by Minitel, arranging to meet, contacting each other and sending obscene messages.