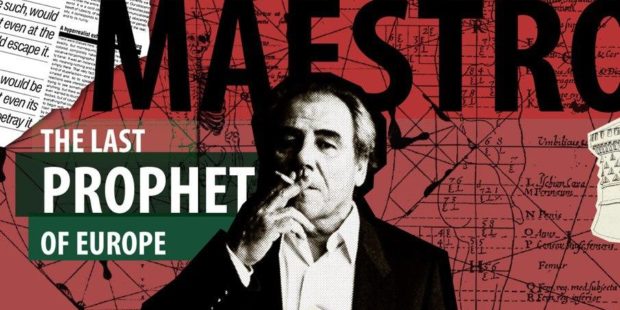 “The problem is what’s behind the request – they don’t like what I have to say,
but they come to me anyway, because they need someone to say something different,
the opposite of everyone else.”

An individual is the first and central subject of Jean Baudrillard’s research. Godfather of postmodernism devotes a third of his works to the individual, “strange specimen” who finally at the very end has to become a human being in its pure sense. Naturally, Baudrillard reflects on the topic of a human from three distinctive aspects: philosophically, sociologically, and psychologically. While reading Baudrillard one can recognize that he also uses works of French psychoanalyst and psychiatrist Jacques Lacan and Austrian psychoanalyst, one of the grandees of depth psychology Sigmund Freud. Jean Baudrillard views a person as a “participant” of this world and the “consequence” of his or her worldview, his approach is appealing as in contrast to other masterminds. He goes from the general to the specific from the start. The philosopher does not scrutinize specifics first but infers it from the general.

If one takes even a quick look at the bibliography of Baudrillard’s books it is evident that he starts analyzing an individual right from the family, house, surroundings in his very first book System of Objects (1968); very philosophical book but nearly a thriller. He poses unpretentious questions that hit a modern man like a ton of bricks. “The time is no longer in the home, no longer the clock’s beating heart, but its registration on the wrist continues to ensure the same organic satisfaction as the regular throbbing of an internal organ.” Clocks did disappear from our homes and we have watches on our wrists but not in our homes. Earlier, there was one shared time for all in the house which was something that unites households. However, now everybody has his own time, that “home” is falling apart as many other things do. Baudrillard presents many illustrations of what people did with their own lives and “sophisticated” it.

Baudrillard uses the generalization as “masses” with a distinct style for the first time in the In the Shadow of the Silent Majorities, Or, the End of the Social (1978). He considers masses a “silent majority”.

Another groundbreaking text of Baudrillard that made him a genius is America, a provocative, scandalous, straightforward, and radical book. For some Baudrillard converted to a persona non grata up to the point that some would stand up and leave in the middle of the lecture or a presentation of the book. This work has caused a resonance in society that some Americans ostentatiously expressed their dissent in recognition of him authoring such a book. On top of this, a few people from the US academia did argue against the ideas of Baudrillard for a long time; it is no surprise as the book is tough indeed. “America is the only remaining primitive society” is already sufficient for a shock and argument in today’s world.

Certainly, it was new to call people “masses”, but the “silent majority” in 1978 became a newer, more radical title. In addition, Jean Baudrillard finds another elegant description of people – the “kingdom of the blind” in his same-titled book Kingdom of the Blind (2002) his later view of humanity in one of his later works. Another relevant book by Baudrillard is Scanned which is another precise term of contemporary man. Even based on the titles of Baudrillard’s books in different periods it is very clear that he brings out details from the general, to be precise an individual. At some point, some mistakenly may think that Baudrillard is indiscriminate, that is not the case. Yes, there is a predominant “mass” from which an individual is “derived” (in no uncertain terms majority would fall into aforementioned categories), at the same time, they can take different forms (“silent majority,” “kingdom of the blind,” “scanned” etc). But there are other types as well: “sincerely mislead ones” and “intentionally misguided ones” which we will look at in more detail further. The third type, to which, of course, Baudrillard would have referred himself, not without humor, is a philosopher. These are people who are able to grasp what is happening around and can look at things objectively.